Guided tour of the mosque
Very gracious lord
01
History
A mosque of international standards as a place of worship
The Taipei Mosque was originally located at No. 2, Lane 17, Lishui Street, Taipei City. It covers an area of more than 300 square meters of Japanese-style houses. It was created in 1949 by the elders of the Muslims, Zheng Houren and Chang Zichun. Place, vigorously appeal. All the church members donated a Japanese-style house to be used as a mosque. However, in the 1940s, the number of Muslims coming to Taiwan increased, and the space of the mosque in Lishui Street was small and obviously insufficient.

After General Bai Chongxi appealed to the government and obtained the assistance of Ye Gongchao, then Minister of Foreign Affairs, to respect the Islamic religious traditions of the state guests visiting Taiwan, a mosque of international standards must be set up as a place of worship. After many times of coordination and consultation, both the government and the association are willing to actively promote the construction of the mosque. And in the name of donating money to build temples to make more in-depth contacts with countries in the Muslim world, in order to achieve the substantive purpose of engaging in national diplomacy. 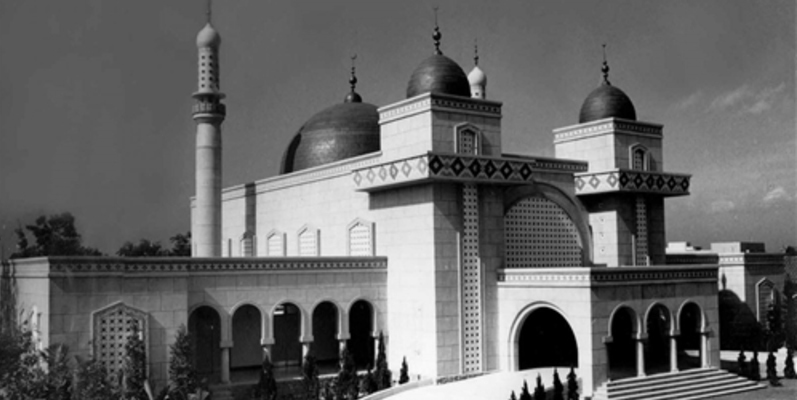 On December 12, 1949, the "Taipei Mosque Construction Committee" was formally established. The purpose is to actually understand the content and requirements of the mosque construction plan, and plan to build a mosque that can accommodate 600 people at NT$6 million. The construction of the Great Mosque in Taipei has not only received strong support from the government, with a loan of 4 million yuan from the Bank of Taiwan in the name of the Ministry of Foreign Affairs as a construction fund; it has also won distinguished guests from Islamic countries (including the former King of Iran Barawi and the late King of Jordan). Sheng, former Turkish Prime Minister Mendelaus, the late Prince Abdullah of Iraq, etc.) and enthusiastic donations from Islamic compatriots at home and abroad to jointly raise funds for the construction of the temple; and it is scheduled to be located at No. 62, Section 2, Xinsheng South Road, Taipei City Purchase land for construction. 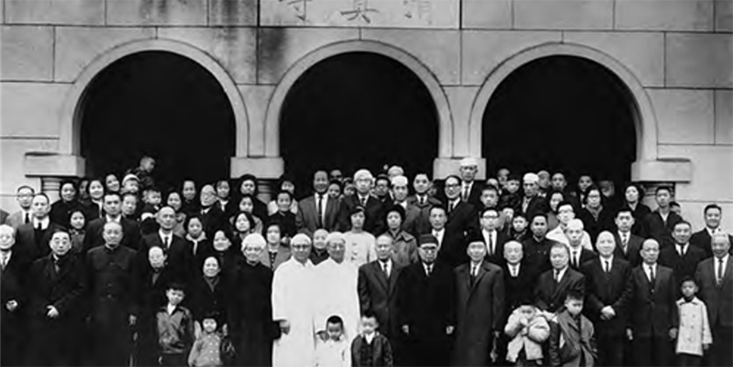 In the decades since the Taipei Mosque was completed, there has been an endless stream of Islamic VIPs, groups and individuals invited, including the late Iranian King Bahlavi, Turkish Prime Minister Mendes, Jordanian King Hussein, and Saudi Arabian King Feather. The establishment of the Taipei Mosque not only continued the important mission of the Lishui Street Mosque to develop Islam in Taiwan, but also because of its special international exchange mission. The kings, presidents and leaders of various Islamic countries in the world have visited the Republic of China, and they all listed the visit to the Taipei Mosque as important. journey.


The Taipei Mosque adopts Arabic architectural design, and is based on the architectural style of West Asian mosques. The building includes a domed worship hall, a washing room, an auditorium office, a cylindrical arch ring corridor, etc. The main structure of the building is reinforced concrete, and the arches, door eyebrows and many exterior walls are decorated with mosaic patterns. In addition, the round stone pillars on both sides are made of chopped stones, and the main doors and windows are designed with large floor-to-ceiling stained glass. In addition, the worship towers over 20m on the left and right sides of the building are also a feature of the Taipei Mosque. /Persian Architecture" Art, etc. 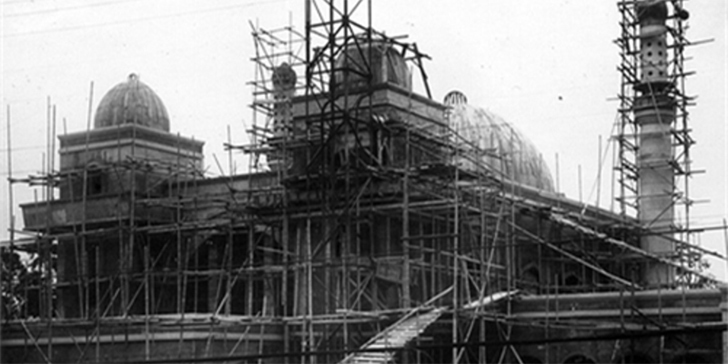 In terms of the interior of the building, the temple imitates the Turkish construction method. The dome of the worship hall is 15m above the ground, the span is 15m, and there is no beam support in the middle. Because idolatry is strictly prohibited in Islam, there are no images in the main hall, and there is an Awen 'Allah' calligraphy inlaid with gold letters on a green background at the top of the concave wall where the apprentice stands. The whole hall is high and open.

Since its inauguration in 1960, the temple has always been a missionary worship center for Muslims in Taipei. If the kings, presidents and leaders of various Islamic countries in the world visit Taiwan, they will visit the Taipei Mosque as one of the important itineraries, including the visit to Taiwan in 1971. The then King Feather of Saudi Arabia. On June 29, 1999, the Taipei City Government officially designated the temple as a designated historic site in Taipei City.

Nowadays, the Taipei Mosque not only provides Muslims for daily religious and wedding and funeral activities, but also open to the general public and all levels of schools in the Taipei metropolitan area on weekdays. 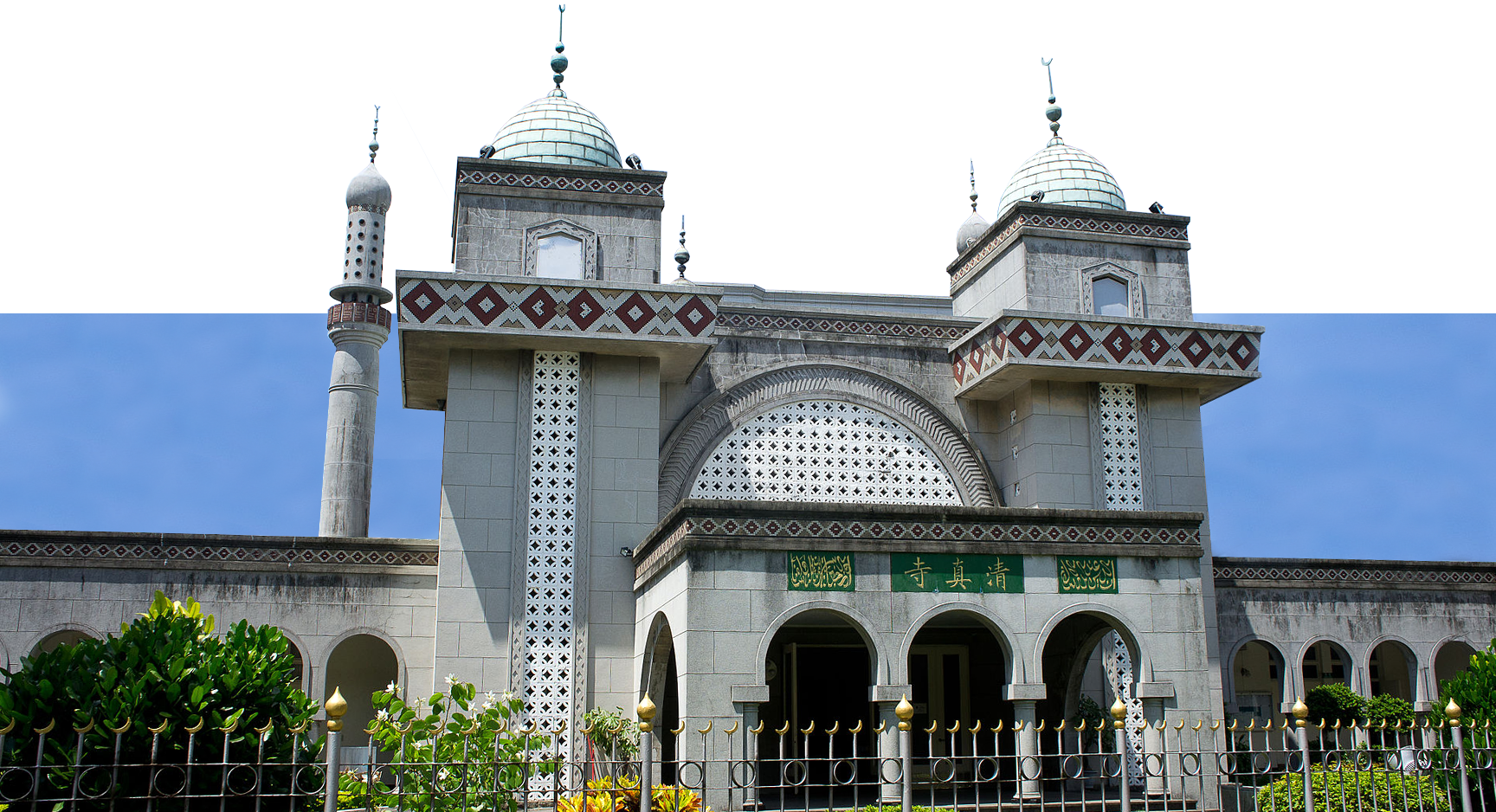 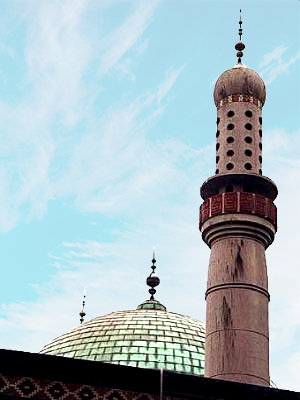 【Call Baita】
The 20-meter-high gray spires on the left and right of the mosque, the red piping on the neck of the tower and the onion dome are quite eclectic of local and Central Asian characteristics. In Islamic countries, when the time for worship comes, the worship tower will send out praises to tell nearby believers that the time for worship is up. Today, the function of calling bahai pagodas in mosques abroad has been replaced by artificial on-site calling loudspeakers. 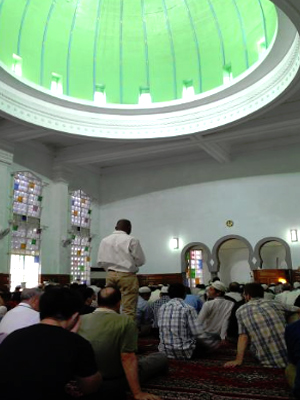 【Domed Hall of Worship】
Walking into the mosque on Xinsheng South Road, the most obvious feature is the large golden copper dome in the center, two small Ottoman-style onion-shaped spires, and two-pillar callout towers. Below the large golden dome, it is exactly The main hall of worship for Muslims. According to the canon, the whole hall is simple and clear, without any figurative decorations, only geometric windows.

The worship area in front is the same as any mosque in the world, facing the direction of the holy place. The dome of the main hall of worship is 15 meters above the ground, and the true path is also 15 meters. It is very spectacular. The floor-to-ceiling windows on the wall are lined with geometric colored glass that can be opened and closed for ventilation.

The original mosque’s worship hall was designed to have a high ceiling on the first floor. Later, because of the increasing number of church members who came to worship, the entrance hall, which was originally designed for high ceilings, was divided into two floors. The first floor was still used as the foyer, and the second floor was used To become a place of worship for female believers, the worship hall is restricted to clean Muslims. 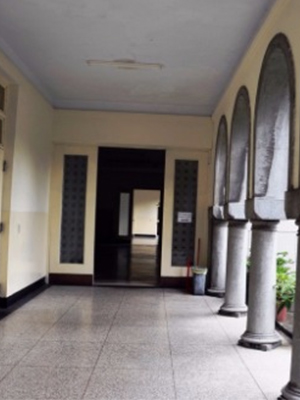 【Imitated Romanesque Pillars】
The mosque combines the imitation Romanesque architecture and the Ottoman-style dome hall. What is rare in Taiwan's mosques is the imitation Roman-style continuous arc corridor of the main building wing. The column and the arch are well-proportioned and square pillows. The inner side of the stigma is chamfered on both sides, and the arch ring is rolled, standing in the front of the green shade, revealing a gleam, making people feel awe-inspiring. 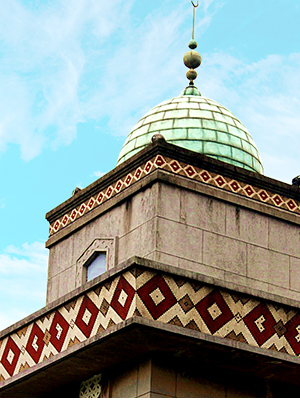 【Construction material and dome】
The main structure of the mosque adopts the main beam and column structure of reinforced concrete. The outer wall is reinforced with cement and cobbled stone imitating stone as the surface treatment. The top edge of the building is decorated with small mouthpiece mosaic strips with native geometric and text patterns. The green dome is covered with copper sheets, and the original brass color has been baptized by the years and oxidized into the green patina seen today.